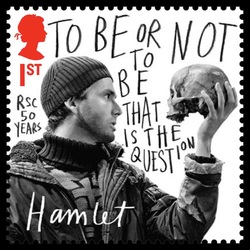 The Tragedy of Hamlet, Prince of Denmark is a tragedy written by William Shakespeare between 1599 and 1602. Set in the Kingdom of Denmark, the play dramatizes the revenge Prince Hamlet exacts on his uncle Claudius for murdering King Hamlet, who was Claudius's brother and Prince Hamlet's father, and then succeeding to the throne and taking as his wife Gertrude, the old king's widow and Prince Hamlet's mother. The play vividly portrays both true and feigned madness—from overwhelming grief to seething rage—and explores themes of treachery, revenge, incest, and moral corruption.

Hamlet is a major work by one of the most famous and influential playwrights in history.


People will always debate teaching Shakespeare in high school, but I always say, "at the very least, it will help you get jokes on The Simpsons."


We will be reading through the play with an emphasis on characterization. Students will be encouraged to read aloud, and we may have students act out scenes (time permitting). There will be a synthesis essay based on theme or character.